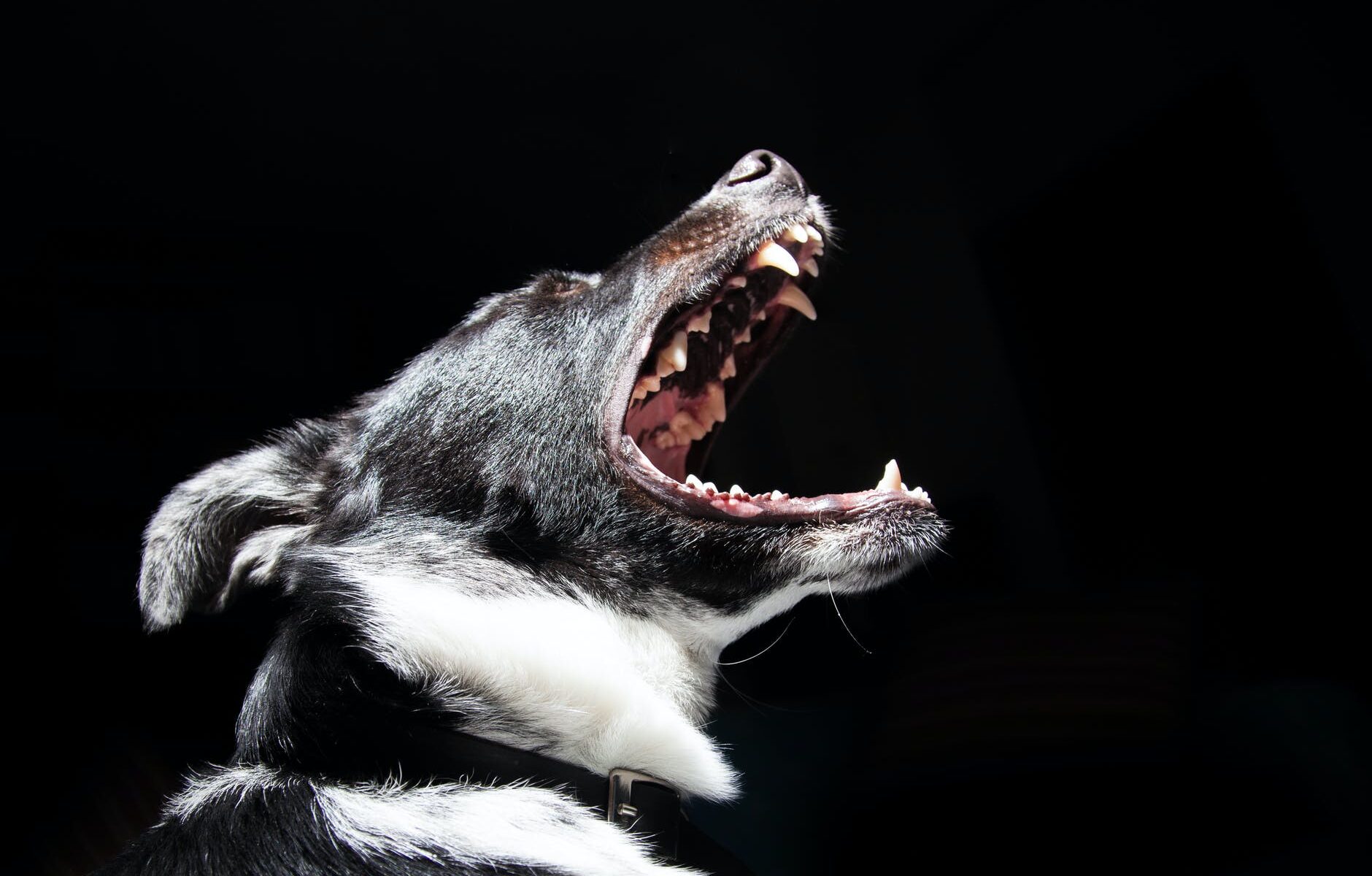 Aggression is “an act that is performed with intent to cause harm” (depending on which resource your consult). I would argue that the vast majority of people will never see an aggressive dog in their lifetime. However, I regularly encounter dogs who are performing aggressive behaviors in order to change their circumstances . . . and in almost every case, the dog is trying to ask for space.

Are the dogs in this video performing aggressive behaviors? Yes!!
Are they aggressive dogs? No!!

This video actually depicts ritualized aggression being performed by two Great Pyrenees dogs, a type of livestock guardian dog (LGD). LGD’s have been selectively bred for thousands of years (dating back to the early Romans) to guard territory and to guard their “flock”. Their Genetics have been heavily influenced by humans selecting for dogs who will guard their flock from predators by instinctively reacting to any unfamiliar beings who enter their territory.

Ritualized aggression is selected for over actual aggression in nature. If a wolf is injured in a fight, there is no emergency vet clinic that he can go to for aid. In many cases, that wolf will die. In nature, if a coyote needs to defend his dinner from another animal, he will start with subtle body signals – whale eye, freezing, showing of teeth. If the challenger moves away, then the coyote simply goes back to his meal – no harm, no foul. If this fails to work, he will advance to growling, snarling, air snapping and even charging. If even that fails to work, the coyote will make a decision to either flee the situation or to stay and fight for his dinner. He will only make the decision to fight if he thinks he will be successful, if his avenues of escape are blocked or if he is really really hungry and his need for food outweighs the risk of injury.

In the case of the LGDs in the video, they started barking when the cyclist moved into the flock and started to scatter them. They advanced when he cyclist ignored the barks and continued doing what he was doing. When the cyclist back away, the dogs begin to retreat, but when the cyclist decides to hold his ground, notice that one dog remains with the flock while the second dog continues his attempts to warn off the intruder. The dog is not advancing or attacking – just barking in an effort to get the man to move away. Even the person behind the camera suggests that the man simply back off. Unfortunately, the cyclist does not recognize that he is creating the standoff by refusing to back away from the dog. Note that the dog is not closing the gap and is continually looking back to see where his flock is at.

This is an excellent video explaining the behavior of livestock guardian dogs and what to do when encountering a working dog and his flock.

What happens when we take a dog that has had hundreds of years of reinforcement history for guarding his flock and we plop him into the middle of suburbia? You guessed it – he will guard his home and his people flock from “intruders”. The “intruder” in his eyes may look like the UPS or FedEx delivery person, the cable repairman or a visiting friend or relative. Again, these dogs are not aggressive individuals, they are simply dogs who are doing what we specifically bred them to do. We may not like it, but we cultivated such behaviors in dog breeds so we need to accept it, expect it and find ways to work around it. Once we understand this, it is easier to approach the situation to come up with a plan. Most of these dogs will be described as the perfect dog at the vet, at daycare and when visiting others – with the unwanted behaviors happening only in the home. We are never going to train these dogs to welcome intruders with open arms, but we can work to reduce his triggers and manage his world to prevent situations from occurring. Creating a greeting ritual with your LGD puppy and practicing this over and over will help set your puppy up for success later on. We can also manage his world with techniques like putting the dog in another room with a wonderful chew toy when visitors are expected … setting up a lock box at the end of your driveway for package delivery … conditioning a muzzle … install a second fence so that you have a buffer zone of fence, space, fence, “world” … keep doors locked to prevent an open door policy that puts “intruders” in danger. It is a whole lot easier to simply change a few of our daily habits rather than expecting that our dog will simply change his instinctual behaviors.

Is the dog in this video performing aggressive behaviors? Yes!!
Is he an aggressive dog? No!!

The dog in this video has been trapped and forced to escalate to biting. No one is listening to the abundance of signals telling the humans that he is not comfortable. Is it okay that the dog is biting a child – obviously not. However, it is not malicious. But, given the number of signals that the dog is displaying in a desperate attempt to communicate his stress, the bite is not unexpected either.

This dog is actively Learning that nothing short of a bite is going to convince his owners to stop. His Environment is impacted by the fact that his small size (Genetics) allows for him to be easily wrapped in a towel and held in place on a person’s lap for forced petting. His internal environment (Self) is being overwhelmed by stress hormones as his fear increases.

What if we simply asked the dog if he would like to interact and then accept his answer.

As a Licensed Family Dog Mediator®, when I see clients whose dogs are performing aggressive behaviors, our first step is to discuss the dog’s L.E.G.S.®. In other words, how have the dog’s Learning experiences, Environment, Genetics and Self (the dog’s internal environment) played into the current situation. Next, we look the circumstances under which the dog is performing the behaviors, as well as warning signals. Finally, we develop a plan for the family that involves: safety and management protocols; realistic goals; and/or reward-based training techniques aimed at addressing the root cause rather than simply suppressing or masking the behavior.

While I have yet to encounter a dog that I would label a truly aggressive dog, I have seen dogs that are not safe. These dogs may, therefore, be candidates for behavioral euthanasia due to an inability to provide balance between the dog’s L.E.G.S®.

What’s in a label?

Labels can be damaging when they affect how we view the individual to which we have affixed that label. When we use the label, “aggressive dog”, we tend to focus on his negative behaviors. We tell ourselves that the dog is doing this on purpose . . . to spite us . . . that he can stop any time . . . that he knows better . . . We are more easily frustrated or angered by our dog’s outbursts..

Instead, let’s remember that the dog is simply performing aggressive behaviors in response to some other factor; such as, fear, stress, pain or frustration. This helps us feel empathy towards our dog , . . understand why he is acting this way . . have more patience . . . to listen when he is speaking through subtle signals. We begin to understand that “our dog is not giving us a hard time – he is having a hard time“. We are more likely to take a gentler, kinder approach . . and to advocate for our dog when the need arises.

When working with a dog who is reactive to certain triggers, we must understand that:

If you and your dog are struggling, locate a professional dog trainer or behavior consultant who will help you work through things using humane training techniques and is grounded in positive reinforcement and Least Intrusive, Minimally Aversive philosophy. Aversive tools such as e-collars and prong collars suppress behavior and may look like they have “fixed” the problem, but those feelings are still there and they will come out through some form of fallout.

Kerrie Hoar has a master’s degree in Biology and is a certified professional dog trainer and family dog mediator. She owns Crimson Hound, LLC dog training in La Crosse, Wisconsin.